The Beginning of Happenings 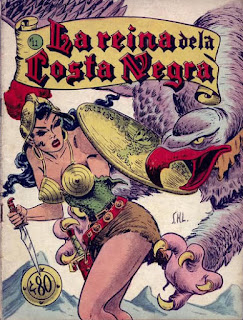 In 1958, a dozen years before Marvel’s official foray into the Hyborian world of Robert E. Howard’s Conan the Cimmerian, and eight years before Lancer’s paperback editions, an unauthorized issue of a series called by Savage Sword of Conan “the Mexican Conan comics” hit stands in Mexico.  From south of the border it migrated northwards at least as far as Los Angeles, where it fell into the hands of Douglas Menville (a man seen briefly as a policeman in one scene of the 1958 cult film The Hideous Sun Demon, among his other varied movie credits).  The unofficial adaptation, La Reina de la Costa Negra (Queen of the Black Coast), was a 32-page four-color weekly “in the form of a long-running serial” that lasted till 1965, when a letter from L. Sprague de Camp, owner of the Conan rights, scared off the unlicensed publisher.

The series’ title is taken directly from the May 1934 Weird Tales short story “Queen of the Black Coast,” but its “writers paid little attention to the original Howard material.”  This begs the amusing question, why rip off REH, only to not use REH?  (One notable difference, no doubt a selling point – several commentators have remarked how the Mexican adaptation is considerably bloodier than anything put out in the States.)  In Menville’s words, it had “primitive black-and-white artwork [and] a blond (!) Conan and his warrior-lady Belit, sporting what looks like a Spanish conquistador’s helmet!”

These seeming disparate elements are best embodied by the image of their fair-haired “conquistador Conan” wearing a horned Viking helmet, which makes its own kind of sense when one factors in Menville’s comparison of the art, all of it the work of one Salvador H. Lavelle, to the style of “Hal Foster’s Prince Valiant and Joe Kubert’s 1950’s comicbook Viking Prince.”  And as Marvel itself has pointed out, the visual comes directly from Howard’s own text in “Queen of the Black Coast”: “His horned helmet was such as was worn by the golden-haired Æsir of Nordheim.”  Irrespective of the blond hair, Viking helmet, and Arnold Schwarzenegger’s Teutonic accent in Conan the Barbarian, it remains true that Conan was a black-maned Cimmerian, those ancient ancestors of the Celts.  But Aquilonia, Nemedia, Cimmerians, Picts – the Hyborian Age is hybrid history anyway.  Considering that Conan creator Howard hailed from Cross Plains, Texas, this so-named “Conan the Conquistador” could even be called a “Tex-Mex” concoction.

“They had passed the southern borders…” 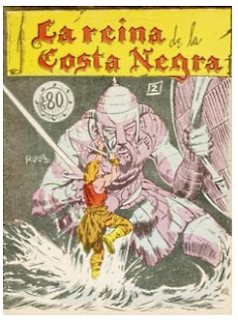 Around that time, Menville was in the editorial business of reviving neglected landmarks of genre fiction with fellow editor Robert Reginald, first through the magazine Forgotten Fantasy: Classics of Science Fiction, then through the publishing imprint Newcastle Forgotten Fantasy Library.  In possession of La Reina #2, he wrote to “The Hyborian Page,” a forum for reader mail, though the “letter was never printed [and Menville] assumed that La Reina was simply not of sufficient interest to anyone.”  Another reason for not pursuing the matter was presumably because he was busy with his own mainly nonfiction writing career, later in life venturing into fiction of his own with the novel Under Egypt from Wildside Press (publisher of many REH titles), which he co-authored with Rae Odell.

Not long after Menville’s unpublished letter, Marvel’s resident REH scholar, Fred Blosser, independently brought the bootleg Conan in question to the attention of Savage Sword of Conan readers in his issue #26 article “The Other Queen of the Black Coast,” but there was even more to the story than that particular piece contained.  This motivated Menville, in issue #44, to expand upon Blosser’s research, turning in an extra definitive piece on the subject, “Conan the Conquistador.”

In Professor Flynn’s coverage of Savage Sword of Conan #44, at Marvel University, he limited his “Conan the Conquistador” comments to this: “Now Mr. Menville has gone on to become quite the email pals with both Professor Matthew and Gilbert — so I’ll cut this short since I’m sure that the latter will chime in.”  Almost four decades later, Marvel University followed the not-quite-cold trail to the door of Mr. Menville – once extensively interviewed by Professor Matthew, in VideoScope #51 (Summer 2004) – in an attempt to get to the bottom of this Mexi-Conan mystery… 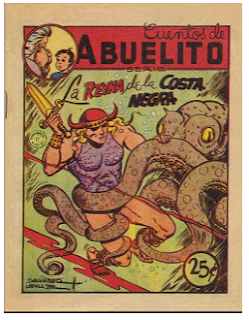 It all began when Menville, browsing a downtown Los Angeles bookshop, pulled La Reina de la Costa Negra #2 from that long-gone rack or bin and plunked down coin for it.  What was the initial impulse that prompted him to pull it?  “I’m sure I bought the magazine because of my love of all things (well, most things) Howard, which began when I first discovered his work in the pulps, and also because it was such an oddity.  What?  A Conan comic book from Mexico?  You’re kidding!  I gotta have that!  That was pretty much my train of thought there, I believe.”

Even the assembled sleuths did not have a complete run of La Reina.  “I remember finding #2 and #16 and eventually two or three others, but I don’t recall which ones,” Menville recounts.  “I found all of the issues I had in various used bookstores, most of which now no longer exist.  Roy Thomas lent me copies of #3 and #4.”

Menville, in turn, lent his issues to Thomas…who apparently still has them!  “Roy never returned them, but he did pay me for the article.  He’s welcome to keep them, which is little enough thanks to a man who made a lifetime dream come true by reprinting in handsome hardcover volumes the entire run of my all-time favorite comic book, Planet Comics.”

Blosser himself only owned one issue at the time of his article (in which, according to Menville’s piece, he “made a few false assumptions”).  Asked if Blosser ever commented on his own more extensive follow-up work, Doug said, “No, I never heard anything from Fred.” 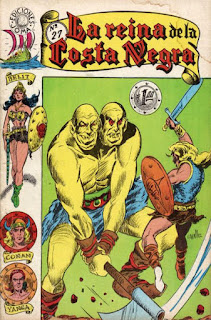 Also unclear, even today, is exactly how long La Reina lasted, with #16 being the last issue whose existence was substantiated by Team Menville.  “Since #2 was dated October 8, 1958, and the magazine was published weekly, I assumed that the first issue had to be dated October 1,” Doug reasoned. “I never made a special attempt to collect the whole run, but 1965 seems to be the last date any of us saw.  I don’t think anyone knows how many issues in total there were.”  (Glenn Lord, in his bibliographic The Last Celt, puts the number at 45 between the years 1965-66.)  [Dean's Note: The fabulously helpful GCD has cover scans for most of the 53 issues published between 1965-1966]

In his article, Menville wrote, “anyone with further information is encouraged to contact editor Roy Thomas or this writer…”  Alas, he recollects today, “No one ever contacted me about the comic; they may have contacted Roy.”  Thomas, in his “EDITOR’S NOTE,” also petitioned readers to provide the same information, expanding his plea for anything about “the 1950’s Avon creation ‘Crom the Barbarian’ which appeared in a couple of issues of a mag called Out of This World.”

“I had both issues of Out of This World Adventures (I think only two issues were published),” Doug notes, “and both had color comic inserts with two stories.  One was ‘Crom the Barbarian,’ with (I think) art by John Giunta, and the other was an SF tale called ‘Kenton of the Star Patrol,’ with art by Joe Kubert.  The Crom stories were standard sword-and-sorcery tales featuring a hero much like Conan, but further details escape me.  It was a daring attempt to attract younger readers to an otherwise average SF pulp, an echo of several pulps from the 1930s that ran comic inserts, although never in color.  Sadly, this experiment didn’t succeed.”

Twilight of the Vikings and Conquistadors

Case closed.  Or is it?  Just as Menville built on Blosser’s initial research, others have built on Menville’s.  At the Cimmerian blog An Age Undreamed Of, Jeffrey Shanks (contributor to the McFarland book Conan Meets the Academy: Multidisciplinary Essays on the Enduring Barbarian) posted his own May 2013 follow-up, the Robert E. Howard Foundation’s nominee for Outstanding Achievement for Online Essay, “La Reina de la Costa Negra: The Mystery of the Mexican Conan Comics.”  It was the third update of something he wrote for REHupa #237 (October 2012) and revised for Comic Book Quarterly #11 (Spring 2013), and in it he cited Menville in both the body of his article and its bibliography, as well as Paul Herman’s 2006 book The Neverending Hunt: A Bibliography of Robert E. Howard, in order to trace “La Reina de la Costa Negra” back even earlier to 1952 when it had an 18-issue run “as a feature in an anthology series called Cuentos de Abuelito (Grandpa’s Stories).” 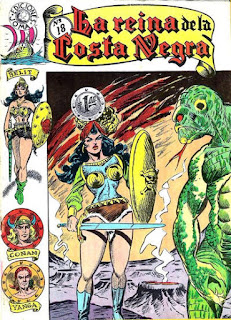 Hunting for issues of this time-lost comic from down Mexico way is nowadays either a costly prospect or a dead end.  However in his essay, Shanks offers glimpses of “Mexican Conan” artwork beyond what Savage Sword of Conan displayed, along with links to many more scans (from Jungle Frolics and CROM!) discovered and collected subsequent to Menville’s eye-opening article.  In addition, threads with images can be viewed at CGC and Comic Book Collecting Association.  There is also an issue-by-issue breakdown site called Conan [MEX] and even a Facebook page dedicated to “La Reina de la Costa Negra.”  The Swords of Robert E. Howard, another internet REH forum, posts scans not only of cover art, but both Blosser’s original article and Menville’s.  The actual issue of Foreign Comic Collector (Issue 2/Dec. 2002) reprinting Shanks’ article “The Mystery of the Mexican Conan Comics” can be found online as a PDF.

All of this owes a debt to Menville and his pioneering quest.  What began with Blosser almost ended with Blosser, had it not been for the dogged detective work of Doug Menville.  Thanks to his article, which built upon Blosser’s and took it to new heights, Menville laid a foundation that others have been building on to this present day.  In light of that fact, Shanks’ La Reina de la Costa Negra article could have arguably (and alliteratively) been subtitled “The Menville Mystery of the Mexican Conan Comics,” owing to the fact that “Conan the Conquistador” (Savage Sword of Conan #44) was the place where the first truly hands-on research and in-depth scholarship appeared 38 years ago.


Posted by Peter Enfantino at 5:00 AM

Visit Our Other Blogs!